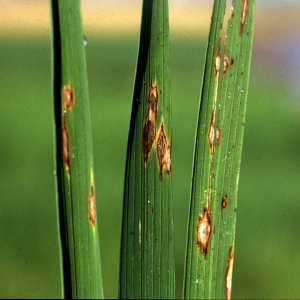 This disease is one of the most important diseases of rice and is prevalent in all countries where rice is cultivated.

In Iran, most rice crops, including the Caspian coast, Azerbaijan, Isfahan, Khuzestan, Fars, Chaharmahal Bakhtiari have been reported. The damage of this disease in Japan at the time of the disease is estimated at six hundred thousand tons.

Symptoms of this disease can be seen in all aerial parts, including leaves, stems, clusters, paddy cover and seeds themselves. Some experts divide blast disease into two stages: leaf blast and cluster blast. Leaf blast Leaf blast in the early stages of growth in favorable weather conditions may cause the death of plants.

On the leaves, the symptoms of the disease appear as spindle spots with a whitish gray center and a brown to reddish-brown border. The shape and color of the spot varies depending on the environmental conditions, the age of the spot and the degree of sensitivity of the rice. At first they are small, then they develop and often reach a width of 0.5 and a length of 1.5 cm. In sensitive cultivars, the development of spots is more, a yellow spot may surround the spots. But in very hardy cultivars, only small brown spots the size of a needle appear. In the case of cultivars with moderate resistance, small elliptical to round spots less than one millimeter long with a brown border appear on the leaves.

The causative agent of blast disease spends the winter in the form of mycelium with conidia on infected plant debris or in the seed coat. The fungus may also spend the winter on some cereals or weeds of this family. Humidity and heat are suitable. Fungi produce many spores. Spores are spread with the help of wind..The causative agent may even spread long distances with straw seeds or rice husks. Fungal spores are formed at a temperature of 28-25 ° C and a relative humidity of 93%. If the relative humidity is less than 88%, the fungus will not be able to form spores. For this reason, the disease is more severe in the shade of trees due to low sunlight and high relative humidity. Also, high density of plants per unit area and high consumption of nitrogen fertilizers can aggravate the disease.