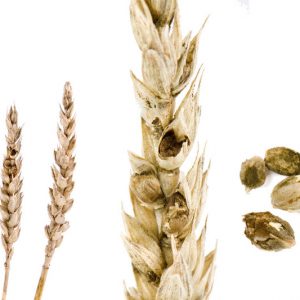 This blackberry, also known as smelly blackberry, is one of the most important wheat diseases in the world.

This disease is called chatbon in French and loose smout in English. Hidden wheat black was first identified in 1755 by the French Tillet. In Iran, it was first reported in 1326 by Esfandiari. The disease is now present in all parts of the world, including Iran. Its average damage in Iran is estimated at about 25 to 30 percent in Iran. It is also reduced. Also, fungal spores are highly flammable, which is ignited by the slightest spark in a combine or thresher.

Symptoms of latent black spot disease can not be detected until the clusters have appeared. Infected plants are usually a few centimeters shorter than healthy plants. Sometimes they may be reduced to half or a quarter of healthy plants. The roots of infected plants do not grow and The tillering of the plant is sometimes increased. In infected flowers, the female is longer and the ovaries are longer and wider and green. If the ovaries of a healthy plant are white, the symptoms of the disease become more pronounced with the appearance of infected clustersThe color of infected clusters is bluish instead of green. Infected plants are sensitive to yellow rust and winter cold, but are more resistant to superficial white spot disease. The glomerulus and glomeruli open more apart. Infected grains are shorter, thicker, and bluish-green that later darken, giving the smell of rotten fish due to the presence of trimethylamine.

So far, four causes of latent black spot disease have been identified in Iran: Tilletia caries, T. triticoides, T. foetida and T. controversa, all four of which are similar in terms of life cycle and pathogenicity.

Overwintering The latent black spot of wheat is often in the form of teliospores on the seeds and sometimes in the soil, which can survive for at least five years, but they are less durable in wet areas. Infected soil is planted. Chlamydospores germinate and produce bases. Above the base, 8 to 16 primary basidiospores are formed. After the seeds germinate, the sporidiums enter the seedling and move through the intercellular space, reaching the terminal myrtle. The fungus grows to the top of the wheat stalk as the terminal bud grows. At the time of clustering, the hyphae grow and spread rapidly throughout all the seeds in the cluster, then many tliospores are formed.

Based on the results of the application of various toxins against the causative agent of latent black spot disease, the best and most effective method of combating this disease is seed disinfection. Methyl thiophanate at the rate of 150 g per 100 kg of seeds in the form of seeds.